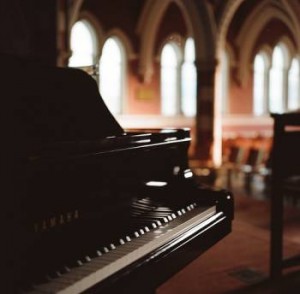 The psalmist says in Psalm 119:24, “Your testimonies are my delight; they are my counselors.” In other words: Who God is determines all I do. Everything hinges upon Who God is, and life is to be lived in light of His unchanging character. The testimonies of God are the revelation of His invisible character. This manifestation of the nature of God is elsewhere referred to as His glory (cf. Ex. 16:7; 1 Kgs. 8:10-11; Ps. 19:1; Ezk. 10:4), and always the purpose is to incite an appropriate response from those to whom He has revealed Himself.

The music of God’s people has a three-fold purpose:

Although the church is a New Testament phenomenon, the doxological purpose of music is not solely a New Testament concept. Psalm 96 links the glory of God to the vehicle of music. In this psalm (itself a song), God’s people are encouraged to sing a new song (v. 1). That is, the character of the song itself (both music and lyrics) is significantly different than any sung before one’s realization of God — Who He is, and what He’s done.

Verses 2 and 3 indicate that this new song is specifically designed to tell of His salvation and to declare His glory. So marked is to be the distinction of this song that it is to bear testimony to the nations, and all peoples. It is no ordinary song in that it has no ordinary subject — great is the LORD (v. 4). But neither is it an ordinary song in that it evidences no ordinary response — He is greatly to be praised, and feared above all gods (v. 4). The proper nature of His people’s response calls others to respond to Him properly. Only a true grasp of God’s glory is rightly able to communicate God’s glory.

The psalm climaxes in verse 9 with the relational triad of the song’s purpose (worship — to respond to God), the song’s appeal (splendor — to reveal to man), and the song’s character (holy — to reflect in oneself), all with respect to God’s glory. The psalm closes with a reminder that God will one day judge His creation in light of His character (v. 13). Man is responsible for how he handles God’s self-manifestation.

Thus, the music of God’s people fulfills its three purposes by engaging in three relationships:

Music is a gift that pleases God by responding to Him rightly. Music is a message that draws others by revealing Him accurately. And music is a discipline that matures God’s people as they reflect Him consciously. When it comes to our music, Who God is must determine what we do.